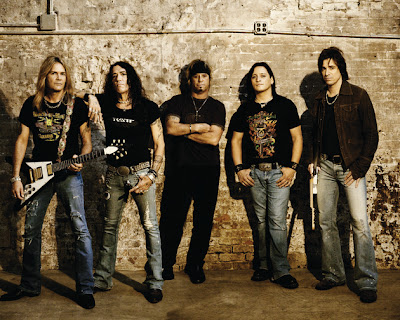 Instrumental in the formation of the early 80’s hard rock and glam metal scene, RATT has sold over 20 million records worldwide. That is an incredible number for a hard rock artist and pretty much unheard of for anyone these days. The band is influenced by 70s hard rock and glam bands such as Aerosmith, Sweet, Van Halen and Kiss and they fused this style with a harder metal edge citing such bands as Iron Maiden and Judas Priest. During the band’s peak they made the masterpiece Out of the Cellar; which is today widely regarded as the band’s best work and a definitive moment in 80s heavy metal.  If you missed them in their heyday, there’s a second wave currently in effect.  RATT recently released Infestation, their first new album in 11 years. It’s not just everyday fans who are excited about it – famous people are too.  At a record release party on the Sunset Strip, Tom Morello, Atreyu, celebrities, porn stars and many others came out to watch the group perform five brand new songs in front of a sold-out crowd. I recently spoke with lead guitarist and virtuoso Warren DeMartini about RATT past and present.

What are you currently listening to?

I am currently listening to Bob Marley, it’s a good wind down.

What’s the most unusual place you have heard your music?

I was doing a tour with another band (Whitesnake) in 1994 and we were in St. Petersburg Russia and someone was playing RATT on a boombox outside of the hotel.

Are there plans to release the new record on vinyl?

We cut that record 24 bit and it was mastered 24 bit with the idea that it might that gets pressed up at some point. That is something we made plans for.

Do you personally own all of your classic albums on vinyl?

Are they easily accessible?

I do look at the once in a while if I have to reference something, like a credit or find out who a photographer was or something like that.

When you were recording Dancing Undercover there were rumors that you guys were going heavier possibly even thrash?

I think that Body Talk was a pretty heavy song compared to what we had done before. When you compare it to Lay It Down, that was heavy but mid tempo. I don’t think we had done anything as heavy as Body Talk since the EP. That was about as far as we were pushing the envelope.

Can you give me a quick comparison as to how your life is on tour now as opposed to earlier in your career?

You get a little smarter about travelling and technical stuff like. I think you pick up more what you need to do the next day, stay up later because you have a day off, back in the day it was just a tour de force, you just figure it out in the field as you were going. I think as you get older you just learn how to travel better; you don’t have so much stuff out with you. You take what you need.

That was during the Invasion of Your Privacy tour. My mom flew in for that, my brother, it was a very special night for us. Talking with Ahmet Ertegun (then President of Atlantic Records), me, my mom and Ahmet; It was definitely a very surreal night for us.

When the band wrote” Round and Round”, did you have any idea the impact that the song would have on music in general?

Not at all, when we wrote that song it was just the three of us in what we named RATT Mansion West. It was a one bedroom apartment in North Culver City. Robin Crosby, Stephen Pearcy and I lived there. It was just a typical afternoon just sitting around playing guitar and I had those parts. Robin helped arrange it and he actually had the bridge part, the “I knew right from the beginning” part as I think it was a piece of music from another song he had going and then Stephen was just sort of scatting over the top of it. We had no idea where that song would take us. Looking back on it, it wasn’t something that was difficult to work up. It was very natural and it was just sort of there one day.

Are you more of a fan of the Sex Pistols or The Clash?

Are you more of a fan of Motley Crue or Bon Jovi?

I like both. I like things from both bands very much. Back in the day they were both doing very well when RATT was just getting started. Robin was really good friends with Nikki (Sixx), and I remember when they played being shuffled through the back door, past the crowd and all that kind of stuff. They were always very nice to us. I definitely remember some good times hanging out with those guys.

What’s the most difficult riff that you have ever written? Is there any one in particular that’s ever given you a bit of trouble?

There were some solos that were “copped” together. Back in the day when I didn’t have THAT much experience I remember we copped some stuff together that was actually very difficult to play because it jumps around the neck so much. I don’t think there’s anything that comes to mind that I can’t do.

Your music was used in both The Golden Child and Point Break, which one did you think was better?

Point Break for sure. Robin, Stephen and I went to high schools that were really close to the ocean and I was very much a part of that culture. I really relate to a lot of characters in that movie. It’s a great film and I am glad we did that song for it. It’s one of my favorite songs to play. I think it’s something that worked inadvertently with the film.

Were you guys surprised with how well the new record has been received by critics and fans alike?

It was a pleasant surprise that it was received so well. We had a little bit of a tip as the CD went out to reviewers about a month before release and the preliminary reports were that they liked what they were hearing so we had a bit of an indicator on that. There’s nothing like it actually coming out and doing well, we are very happy about everything.

The opening track on the new record “Eat Me Up Alive” is a classic RATT sound with an “all guns blazing” approach. Is that meant as a statement of sorts such as “we are back”.

I remember our A&R guy at Roadrunner really was hoping that we would open the record with that as he thought it was a “tour de force” as to what the record was about, it ended up working out well for them and us.

The dueling solos are reminiscent of you and Robin back in the day, did those come together easily? Did you and Carlos have a natural chemistry?

We do have a natural chemistry; we both sort of grew up on the same stuff. We both like Jimi Hendrix and the 60s British Invasion sound so I do feel like we are coming from a similar place guitar wise and yeah, it did fall together very easily, very easy to work with and we had a very good time making this record. The double leads in “Big Bite”, which is one of my favorites, came together over a couple of hours one night.

Who came up with the groove for “Garden Of Eden”?

I came up with that, it was a song I wrote probably around 1990. I made a demo of it and the tape machines that I made the demo on don’t even work anymore. It somehow made its way through my memory. I started playing it during a break as I was trying out some gear or something. I was just sort of playing this riff and Stephen came back in and said “what’s that”

How did the band get involved with Roadrunner Records?

We were waiting for a connecting flight in Atlanta and Tom Lipsky was also waiting for a connection and we started talking. He asked what the band was doing and we told him about a show we had. He came to the LA show and after wards he came backstage and said he was putting a new label together at Roadrunner and he wanted RATT to be the first signing. It was sort of a chance meeting and a great thing because he got to see where the band was at in a very honest way. He said “this is still very alive and well and I think that with a record company that knows what to do with it, this genre is going to do well again. ”