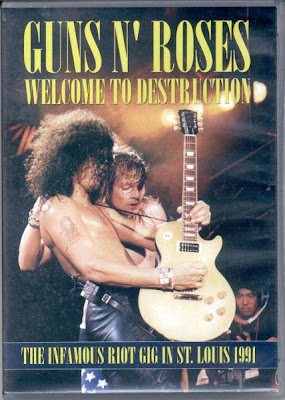 It was July 2, 1991, just two weeks before my 17th birthday. I was at Riverport Amphitheater in Maryland Heights, Missouri, just outside of St. Louis. Skid Row had just finished an amazing set as they were touring in support of their number one charting masterpiece Slave to the Grind. My high school buddy and I had the absolute worst seats in the house that evening as our backs were literally against the fence in the lawn section. The place was packed and we eagerly awaited the headliner, Guns N Roses. The band took the stage that warm summer night and truly put on a show worthy of the band’s bad boy reputation. These guys were the real deal rock and roll band and at the top of their game at this point of their short but infamous career. The show started off fantastic and everything was going fine until lead singer Axl Rose went a bit haywire. During their performance of “Rocket Queen,” the 15th song in the set (including drum and guitar solos), Axl jumped into the audience and tackled a fan who was taking pictures. This occurred after Axl had pointed out the fan, told security to confiscate the camera, and waited a mere five seconds before deciding to dive into the audience and take the camera himself. During his attempt, he inadvertently struck members of the audience and security. After being pulled from the audience by members of his crew, Rose said: “Well, thanks to the lame-ass security, I’m going home!”, and then slammed his microphone on the ground and left the stage. The sound the microphone made was like a gunshot. Slash quickly jumped on a mic and said to the audience, “He just slammed his mic on the floor. We’re outta here.” Shortly thereafter, the angry crowd began to riot.
I remember clearly as the chaos took over the entire venue. We ran up to the seats in order to get a better look at what was happening. We saw fans who bum-rushed the stage then running off with guitar amps, drums, and lights; pretty much anything they could grab. The venue security began spraying a fire hose on the crowd in an attempt to keep them back. A few minutes later, said fire hose passed right over my head as the rioting fans overtook the under-prepared house authority. At this point my friend looks at me and says “We gotta take something”. I think he is joking, as we are in the midst of a full blown riot,  but then I witness him begin kicking the metal chairs bolted to the cement in an attempt to rip them from their very foundation. As an entire row comes loose, I grab one end and we begin running. As we make our escape, we saw numerous disturbing incidents. Fans were overwhelming the merchandise booths grabbing stacks of T-shirts while others took aim at the now unattended bars stealing full bottles of liquor turning them into Molotov cocktails. It was a pretty scary scene to witness firsthand, but kind of exciting at the same time. We took our souvenir row of chairs and put it in the back of his mom’s station wagon as if we were loading a torpedo into a submarine chamber for firing. During our escape we found ourselves picking up a few refugee fans asking us for a ride and then made a break for the gate throwing a blanket over our prize to get past the cops checking cars as they left. We got home late that night safely and each took a part of the row of chairs we had seized. It was the ultimate fan piece of the evening; I mean we each had a part of what would later be called “the worst mess in St. Louis rock history.” Fast forward three days to Friday July 5, 1991……..
My friend and I return to the Riverport Amphitheater for the Warrant concert we were both eagerly anticipating. As we walked to our seats joking about the craziness that ensued just a few days earlier, we noticed that not all of the seats that had been damaged in the riot had been replaced yet. We arrive at our designated seats, tickets in hand, and realize that exactly three days prior we had stolen the exact row of chairs we were to be sitting in that very evening. That my friend is the irony of participating in a heavy metal riot. 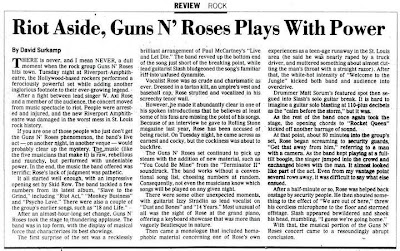 My ticket to the Warrant concert exactly three days after the riot for a seat that ironically was not there. 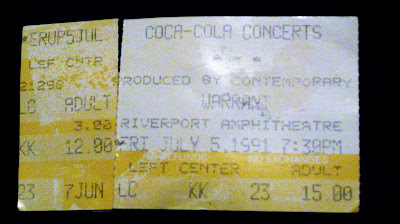 The souviner: The end arm rest of row KK. 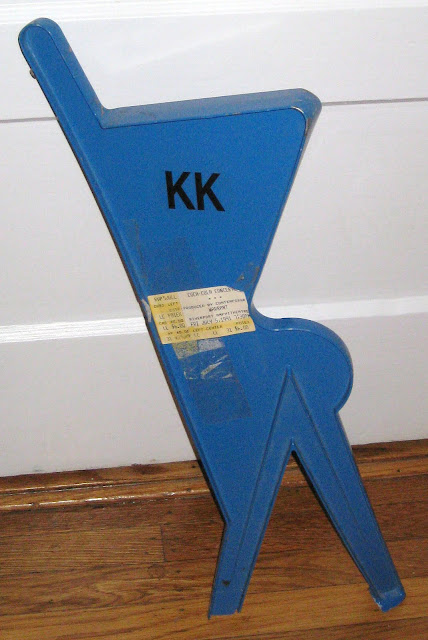 The footage was captured by Robert John, who was documenting the entire tour for the band. Rose was charged with having incited the riot, but police were unable to arrest him until almost a year later, as the band went overseas to continue the tour. Charges were filed against Rose but a judge ruled that he did not directly incite the riot.
Rose later stated that the Guns N’ Roses security team had made four separate requests to the venue’s security staff to remove the camera, all of which were ignored, that other members of the band had reported being hit by bottles from the audience and that the venue’s security had been lax, allowing weapons into the arena and refusing to enforce a drinking limit. Consequently, Use Your Illusion I and II’s artwork featured a hidden message amidst the Thank You section of the album insert: “Fuck You, St. Louis!”