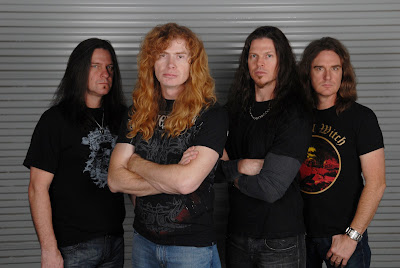 Megadeth is arguably one of the greatest metal bands of all time with worldwide sales of 25 million and 8 Grammy nods. Currently the band is on tour celebrating the 20th anniversary of their landmark metal opus Rust In Peace.  I had a chance to speak to bass player and founding member Dave Ellefson about all things metal, and baking.
I always like to ask about tribute bands and what they mean to the band to which they so passionately pay homage.  “There are a gazillion Megadeth tribute bands which is the ultimate honor, says Ellefson.  There is one called Hangar 18, the bass player is actually a girl and she calls herself Mellefson. It’s a really sweet thing to do. Years ago when we were recording the Youthanasia record in Phoenix we had just moved out there, me and Dave, one night we noticed there was a band playing half Metallica half Megadeth cover band, that was playing at one of the local clubs in town called the Mason jar so me and Nick Menza and Marty Friedman went out to see them and jumped up on stage and played a couple of tunes with them; blew their mind!”
In regards to what the band may consider their finest moment, I asked what they consider to be their absolute masterpiece. “A lot of the stuff off of the Rust In Peace record is probably some of the most orchestrated I’ll say, orchestrated not with outside instruments, but by just the four of us playing it. I think of songs like Holy Wars for instance, everything from fast stuff, to half time breakdowns, nylon string guitars, multiple tempo changes. Holy Wars could be one of the quintessential masterpiece arrangements of our career.”
I asked Dave to talk about how his life is different now as opposed to earlier on in his career. “Years ago, at the very beginning, you are going out and you got nothing to lose, says Ellefson. That’s the best way to start a rock band and I think you hear that in the music. You’re not tentative, you’re not timid; you go out there all guns blazing and you put everything in your life on the line. Those (virtues) make the best rock n roll bands.” He continues, “After a while you have business to tend to, and things you want to maybe be a bit more cautious about. Then it becomes a matter of self preservation, not only for your career, but for your life. You can’t burn the candle at both ends like you did in your early days because that will take you down as well.  I think at this point it becomes a balance of both. We are really here to play that 70 minute set. The other 22 hours and 50 minutes of our day are all focused on those 70 minutes that we are on the stage. It’s sort of like a team getting ready to play a game.”
Ellefson recently contributed to the much anticipated upcoming Heavy Metal cookbook release entitled Mosh Potatoes. I asked him about his recipe. “I learned how to cook growing up on the farm, Ellefson remembers. My mother was a stay at home mom, my dad was working full time with the business of farming, so I learned how to cook. I spent a lot of time hanging with my mom in the kitchen, if for nothing else, as a way to get out of doing brutal farm work.”
Ellefson continues, “I was downstairs in the basement playing my bass and I would come up hungry and help my mom cook. I especially helped my mom bake. For whatever reason, baking seemed to be my forte. My wife is a really good cook; being from New Jersey with Italian and Irish heritage she could open the refrigerator and a huge spread appears out of nowhere. For whatever reason I am better at following a recipes and baking; I seem to be better equipped for that mindset of being in the kitchen.”
I chimed in to ask if he has metal playing in the background during his baking episodes. Responding amusedly, “A lot of times around the house we have the food network on which is awesome because my daughter who is eleven is learning how to cook and she’s really into it. She can basically make a meal for her and her older brother if she needs to.”
I asked Dave about the recipe that he submitted to be featured in Mosh Potatoes asking if it is his favorite.  “It’s one of the ones that I like. Christmas time is one of my favorites because that’s when all the really good baking starts to happen. I’ve got a lot of really good recipes that my mom used to make, a lot of cookies and various things like that so I love when Christmas comes around. I start baking in early December and I bake a lot of things for friends and show up at their house at Christmas parties bearing gifts of stuff I baked.”
All that talk about baking I thought it only proper to get back to Megadeth and ask about new music. Ellefson enthusiastically chimes in, “We’ve actually started writing some new material and cataloging some ideas away and writing lyrics. We are in the process of creation; the real full on composing probably won’t happen until we are in the studio. With all this big monumental touring we’ve done this year we are really excited to get in, I’m thinking sometime early next year we will get that process rolling.”