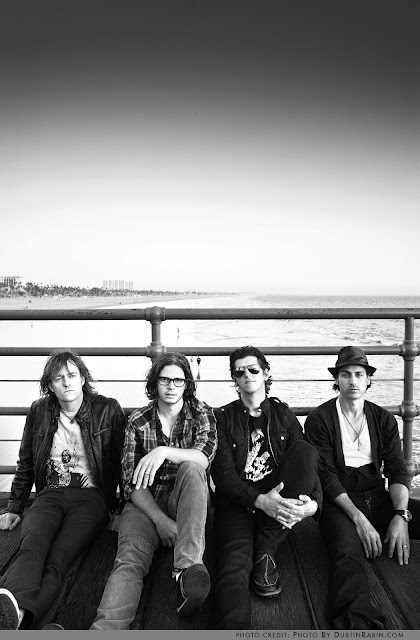 Our Lady Peace Begin Again and Burn Burn Ever So Brightly

Our Lady Peace returns in true form with their latest studio album Burn Burn. The Canadian foursome best known for their signature alt-rock classics such as “Naveed”, “Superman’s Dead”, and “Clumsy” have always been on the cutting edge of modern rock and continue to be. Selling over 5 million albums to date worldwide, the band is stronger than ever before with a new “do it yourself” attitude and no one to answer to but themselves and their fans. I had a chance to catch up with vocalist and co-founder Raine Maida before a show in Kansas City for a chat about all things Our Lady Peace, past and present.
The band began working on Burn Burn, their seventh studio album, in February 2007, completing it in March 2009. Maida solely produced the album, and it was released in North America on July 21, 2009. The band had parted ways with its longtime major label partner and had complete control on this project. “We just went with our gut, because we didn’t have anyone telling us no”, says Maida. “We just love writing and playing these songs, so basically that’s what we went with. It felt like this handful of songs is where the band was at that moment. We really tried to record most of the record live off the floor and that gives it a little bit different energy than we’ve had on the last couple of records.” Burn Burn comes across as a very guitar driven record. “Steve’s guitar playing on this record is phenomenal,” explains Maida. “All of the solos and most of the really out there guitar stuff is all live during the recording of the song. There are guitar solos in lots of the songs, and we really haven’t had that in a long time.”

The first single “All You Did Was Save My Life” is a perfect opening cut on the album, making a sort of musical statement that says the band is back in the saddle. It is also a sort of anthem for the band. “There are a lot of parallels on this record. The title Burn Burn comes from a Jack Kerouac quote,” explains Maida. “It’s about rebirth, it’s about liberation, and it’s about floating above the status quo. I think “All You Did Was Save My Life”, “Paper Moon”, and “The End is Where We Begin”, are all about that. About us getting ownership of our masters back, making a record on our own terms, and really feeling like we are taking control of our life again as a band. It’s an amazing place to be. In a way, whatever’s happened in the past has saved us, we tend not to look at things too negatively and just try to learn from it and move on. The place that we found ourselves together, in a sense, saved the band.”

Another stand out track on the record is the hauntingly atmospheric and epic last song “Paper Moon”. “We play it in the set every night, it’s just amazing how it connects live with people,” says Maida. “When you have a song that people may not know from the record or have never heard and it connects, it’s such a pleasure to play.” Speaking of connecting with the audience, many times the crowd will take over singing familiar favorites at the live shows. “It’s humbling; I mean last night I don’t know if I sang a word to “4am”, explains Maida. “I just let the audience sing it all. It’s one of those things, the connection we have with our fans, and I never take it for granted.”

I took the opportunity to ask Raine what he has been listening to lately. He responds, “Manchester Orchestra, Bonnie Prince Billie, and I really dig the latest Jay-Z record, I think that stuff is amazing.” I also asked if he had a guilty pleasure for any 80’s Hair Metal bands. “There was a four month period where I had that Def Leppard record Pyromania, I think it was my cousin I worked with at the time who left the tape in our truck and I listened to that for a little while. There was something really cool about it. The songs were so well crafted, it was produced so well, and the way Mutt Lange does records I knew it was good.”
Our Lady Peace continues to tour in support of Burn Burn and currently have a new single out “The End Is Where We Begin”. Maida also mentions that new material is already in the works. “We are talking about the next record already and the new stuff is going to be full on guns blazing.” Maida also mentions the band is in a very good spot mentally and physically. “Just the four of us on stage being able to really take ownership of the songs and enjoy them. It feels very powerful to us. I don’t think the band has ever been better live, not even close. “
http://www.ourladypeace.net/