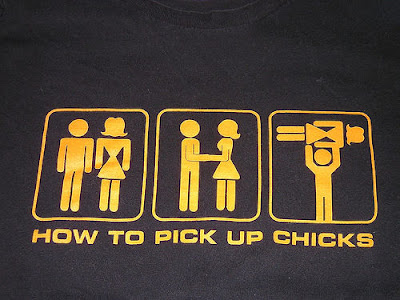 The current dating scene can be quite a challenge for even the most successful and charismatic people. I thought it would be interesting to share some insight that I have gained during my tenure as a thirty-something living in San Francisco. Even though I am no longer single, I find myself giving others advice on what and what not to do. Dating is not as easy as I remembered it being when I was in my twenties, and I think as we get older we become a bit less logical in a sense. We either become a bit desperate or just don’t care enough to make the right decisions. With that being said, here is a brief field guide to garnering the interest of a particular someone and gaining the upper hand while minimizing risk in the unpredictable world of dating.

It’s ok to shoot a little above what you think you are capable of dating. If you have a good sense of humor and a good personality, this can take you up a notch or two in a woman’s eyes. It’s all about being confident but not arrogant, portraying some type of intelligence, and being funny without being too funny. A classic example of this would be Lyle Lovett and Julia Roberts, now Mr. Lovett must have had one hell of a sense of humor, but it does prove my point. Also try to avoid lines such as “I may not be the best looking guy but I’m the only one talking to you.”

Man up and give her a call. It’s very impersonal to text someone or send them a DM over Twitter. Why not just pass her a note on a bar napkin that says check yes or no if you would like to go out. Social Media has made it easier than ever to communicate and stay in touch; it is not meant to be used as a speed dating site. Do not turn Twitter and Facebook into your own soap opera called “Days of Our Virtual Lives”. Follow this rule: it is absolutely necessary to establish verbal communication before you dive into text messaging or the world of Social Media.

Now this you can turn into a soap opera, maybe even a low rated reality show. Think about this; you can pre-screen every date you have from now on. What could be easier? If only this was around when we were all in college I am sure we would have had many less embarrassing mornings. The only drawback is that some people are uncomfortable putting themselves out there for everyone to see as if they have “failed” at conventional dating. In reality it’s the exact opposite. That person is taking control and dating smart. Just remember to have patience and not send out one hundred generic emails. It’s kind of like applying for a job where as each cover letter (your introduction email) needs to be specifically catered towards the individual you are interested in. Even if it does not work out on the first few encounters, keep this in mind as a motivator; “Sex without love is a fantastic healthy exercise.”

The three day rule is bullshit and only applies to punch lines in movies from the 90s. If you were lucky enough to get a girls phone number use it wisely. Call one time and put the ball in her court. If she does not return the call then simply move on. If you start to see any similarities between yourself and John Favreau’s character in the movie Swingers, destroy your phone immediately and seek therapy.

Unfortunately there is still a game you must play in the beginning. You must not like this person more than they like you. The element of the chase is still very important, but do not over do it. There is a very fine line to walk, and it can be very difficult at times to avoid crossing it. To help make the right decisions during this trial period I have come up with a simple list of dating do’s and don’ts:

DO take her to see John Mayer, The Roots, The National, or Coldplay

DO NOT take your date to the Slayer/ Megadeth concert, or for that matter anything heavier than The Fray or duller than David Gray, just to be safe. Just remember “no heavier than Fray, no duller that Gray.”

DO learn how to use chop sticks and take her to a Sushi Bar of her choice.(A good place would be one where there are more than two tables full during dinner service to be sure the food is fresh.)

DO NOT try to impress her with your knowledge of sushi if use a fork to eat it.

DO nod your head and pretend to be interested in everything that she has to say.

DO NOT doze off while she is talking to you even if you think you would have more fun watching an all day marathon of So You Think You Can Dance.

DO tell her she looks beautiful when you first see her.

DO NOT expect any type of compliment whatsoever in return.

DO put on any CD from Jeff Buckley as this is the most universally appealing music to women.

DO NOT put on side two of Zeppelin IV as Mike Damone famously claims in Fast Times At Ridgemont High.

DO take things slow and show that you are interested in seeing her again without being overbearing.

DO NOT say to her “This has been the most stimulating 15 minutes of conversation I’ve ever had. What are you doing for the rest of your life baby?”

DO go in for the first kiss at the end of the date. The perfect kiss is soft and warm with a bit of a nibble on the bottom lip from time to time.

DO NOT attempt to swallow her entire face while your tongue is down their throat like a deleted scene from Alien.

As we all know dating can be very stressful and takes patience to find the right person. So stick with it and try new things while keeping it all interesting. Until then here’s to keeping your sanity.