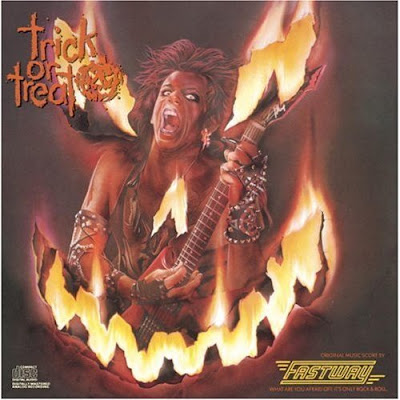 Making a play list for your Halloween party can be quite the undertaking. I have painstakingly searched the depths of hell to find the most evil music possible without having to turn to the mutilated goat heads and pigs blood characteristics of Swedish Black Metal. If Satan has an Ipod, I can guarantee you that these songs are on it. But beware, play these songs at your own risk, as demons have been known to fly out of speakers blasting this witches brew of sonic evilness.

Motley Crue – Shout At The Devil” – This whole album scared the sh*t out of me when I was a kid. Evil Factor – 9 Megadeth – “Wake Up Dead” – The song is mostly instrumental, and is about singer Dave Mustaine fearing revenge from his girlfriend after he cheats on her. Frightening indeed. Evil Factor – 8

Ozzy Osbourne – “Bark At The Moon” – Was it Ozzy’s idea to dress up in that ridiculous wolf man costume in the video? Probably. Evil Factor – 6 Marilyn Manson – “This Is Halloween” – Forget what I said about Danzig; Marilyn Manson is the devil. A great interpretation from The Nightmare Before Christmas. Evil Factor – 10

Black Sabbath – “Children of the Grave” – The soundtrack to creepy graveyards across the world. Evil Factor – 10

Iron Maiden – “The Number of the Beast” – Michael Jackson had Vincent Price do spoken-word spookiness on 1982’s “Thriller.” Iron Maiden couldn’t afford Price so they hired some guy to speak like Price for the intro to this evil gem. Evil Factor – 9

Metallica – “Last Caress/ Green Hell” – It only took a few choice lyrics to offend every person on the planet with this song, clearly a high point for the band. Evil Factor – 9

King Diamond – “Halloween” – Although he is not really a king at all, he does have a loyal following of face-painting metal heads. Evil Factor – 8 Judas Priest – “Painkiller” – The Painkiller is described as a metal messiah sent to the world to destroy evil and rescue mankind from destruction. And no I am not making this sh*t up. Evil Factor – 8

Alice Cooper – “Keepin’ Halloween Alive” – The king of all things Halloween delivers a new song for the holiday. Evil Factor – 7

Have any to add yourself? Join the conversation in the comment section below.

One comment on “The Ultimate Heavy Metal Halloween Playlist”