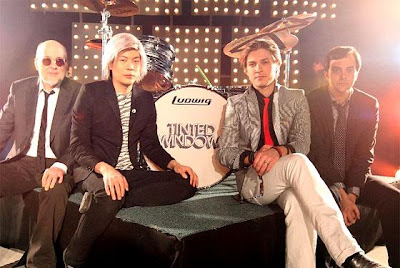 Tinted Windows – Your New Favorite Supergroup.
By Jason A. Miller

Tinted Windows is not your ordinary rock super group. An all-start band, the ensemble consists of guitarist James Iha, previously of The Smashing Pumpkins, singer Taylor Hanson of Hanson, bassist Adam Schlesinger of Fountains of Wayne and Ivy, and Bun E. Carlos of Cheap Trick. Their self-titled release is clearly this year’s finest example of the lost art of Power Pop; bringing back the days when Cheap Trick and Elvis Costello ruled the airwaves and sold out arenas. I was lucky enough to catch the band before one of their shows, which can be quite a challenge to pull together with the members’ busy schedules. “We have a master calendar and when there’s an empty spot, here we are” says drummer Bun E. Carlos who had the day off from his current Cheap Trick / Def Leppard/ Poison tour.

When asked how the band came together, James Iha chimes in, “I know Adam because Smashing Pumpkins and Fountains of Wayne toured together in ‘97 and that was right around the time Taylor’s band was releasing their first record.” Turning to Bun E, he says, “We played shows together, right?” Bun E replies casually, “Yeah, we opened for you guys in ‘95.” James immediately responds lightheartedly, “Man, we should have opened for you.”

Tracks such as the first single “Kind Of Girl,” the stunningly gorgeous “Back With You,” and the undeniably catchy “Messing With My Head” are songs that only a certain breed of musician can write and come around only when the Power Pop stars are perfectly aligned. They are nestled into a record of pure Pop Rock genius. Like Cheap Trick with their masterpiece In Color in 1979, Tinted Windows have crafted a true gem in every sense. After singing a line from the song “Nothing To Me” in my best A cappella karaoke voice, James jokingly asks if I want to sing. Adam offers up “Taylor actually wrote that song in the studio while we were working on overdubs. He just went to the piano for a couple of hours and came out and said, ‘Check this out.’ “

I asked what it’s like to play with Bun E. Adam answers first, “It kind of freaks me out sometimes when I turn around and realize that he’s the drummer in this band. I can’t look back too much or I get nervous.” Bun E follows up, “That door swings both ways. I mean, there’s a great guitar player and it’s not Rick, a killer bass player, it’s not Tom, and a killer singer that’s not Robin. It’s like, Whoa!” Adam replies, “Cheap Trick was definitely a big influence. That’s part of the reason we called Bun E to begin with.” Taylor chimes in, “Before we thought Bun E would even go for it, we said ‘We need a drummer that has that Bun E Carlos sound, maybe Bun E would be into it.’”

Curious to know what these guys currently listen to, I ask what’s on their playlists. Bun E sits up and pulls music reviews from his wallet, clipped from magazines. “I have a shopping list. I carry this stuff around with me. Imogene Heap, I saw her on Late Night.” Adam adds, “I just got the new Brendan Benson record that I like.” Without hesitation, Taylor quips, “Chester French, Fleet Foxes, I like the new Wilco record.” James, who has been constantly cracking jokes throughout the interview in the style of Steven Wright, says, “I can’t think of anything new but I did just download a bunch of old Elvis Costello tracks.”

Is there going to be another Tinted Windows record? Adam replies, “I would love to do another record, I mean I hope we do. It might be a little while since we might be moving into a Hanson album cycle and a new Fountains of Wayne next year. James has a solo record (to be released next year). At least for me, now that we have a sense of what the band is, it might be easier to keep writing for it and maybe we will find some time to do another record.” James sarcastically replies, “We might do a Christmas record.”