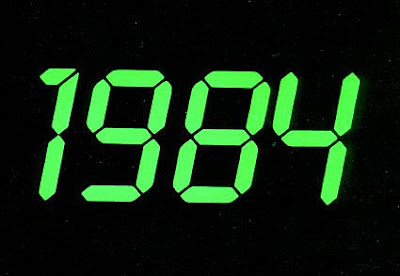 Van Halen on Guitar Hero, Hot Tub Time Machine coming to theaters next month, and vinyl records peaking in sales for the first time in two decades, are just a couple of the retro pop culture trends that bring back memories of a great decade and thus one of my favorite years; 1984. Why was this year so significant you ask? Well there were several quintessential moments that would turn out to leave a profound mark on music for decades to come. For one, I got my first compact disc; Metallica’s Ride The Lightning. Yes I was a rebellious metal kid, but little did I know what else would happen in such a phenomenal time in music. Here’s how I remember it:

Let’s begin with my favorite albums from 1984.

Ratt – Out of the Cellar – One of my first heavy metal records, this is an awesome record. Who could deny playing air guitar to songs like Round and Round, and who could forget a crossdressing Milton Bearle (whose nephew Marshall Berle was Ratt’s band manager at the time) being terrorized during dinner?

Dio – Last In Line – From the man who invented the devil horns. This thing went platinum by the way!

Accept – Balls to the Wall – Udo Dierkscheider and company sold over 2 million records and introduced the term “gay metal” due to the controversy that broke out upon its American release. The record’s title and front cover were deemed by some as homoerotic. I don’t remember that at all as I was just happy to hear something heavier than the Scorpions!

Metallica – Ride the Lightning – Everything that pissed off my parents all rolled up into one mad thrashing metal masterpiece. This thing was like a virtual upside down cross and melted the brains of anyone with weak eardrums.

Iron Maiden – Powerslave – My bedroom was covered with Maiden posters of Eddie, even more images to piss off my parents. The band recorded this album while drinking and partying in the Bahamas; I had no idea that place could inspire such heaviness; could the birth of Power Metal stem partly from this paradise?

Twisted Sister – Stay Hungry – I had the 45 of We’re Not Going to Take it and must have played that a million times. The perfect rebellion record for any ten year old adolescent deciding that they are not going to take “it” anymore, even though they are not actually sure what “it” is as of yet.

Dokken – Tooth and Nail – Rocking enough for the dudes, and pretty enough to get the chicks. Now only remembered for coining the term “Rockin’ Like Dokken” and a ridiculous software commercial last year where they get a beat down from a chicken.

Judas Priest – Defenders of the Faith – 9 albums by 1984? Wow. “Eat Me Alive” was listed at #3 on the Parents Music Resource Center’s “Filthy Fifteen,” a list of 15 songs the organization found most objectionable. PMRC co-founder Tipper Gore stated the song was about oral sex at gunpoint, the band famously replied, “You’re nitpicking.”

Queensryche – The Warning – What to write about this one…ummm…well although they looked like vampires, they would later become genius and invent operatic rock. Oh, and it was recorded at Abbey Road studios. To this day no one knows how the band made it past security to even get in the joint.

WASP – W.A.S.P. – Blackie Lawless becomes the poster child for the PMRC and the reason we have Parental Advisories on records today. The song Animal (F*ck Like A Beast) excited Tipper Gore in all the wrong ways and only made it to number nine on the “Filthy Fifteen”. What a letdown! Due to his religious beliefs, Blackie Lawless will no longer perform this song live, even a bigger letdown.

Scorpions – Love at First Sting – We were all rocked like a hurricane until the band re-recorded it with a symphony orchestra where it turned out to be rocking more like a tropical depression.

Next let’s move on to my favorite music related events of 1984:

1. Michael Jackson’s hair catches fire during the filming of a Pepsi commercial.
2. Soundgarden forms.
3. The birth of Mandy Moore.
4. “Relax” by Frankie Goes to Hollywood reaches number one in the UK singles chart; it spends a total of forty-two weeks in the Top 40 as the band continued to publicly deny that the song’s lyrics were sexual.
5. Canadian music video channel MuchMusic debuts. The first video played is Rush’s “The Enemy Within”.
6. The first annual MTV Video Music Awards are held in New York City. Herbie Hancock wins the most awards with five, and The Cars take the highest prize of Video Of The Year for “You Might Think”. However, much attention is garnered by Madonna for her controversial performance of her hit single “Like a Virgin” in which she rolls around on the stage, revealing lacy stockings and garters, and grinds her crotch against her veil paving the way for up and coming young female singers everywhere and prepping us for the later emergence of Britney, Xtina, Mariah, and GaGa.
7, The first Compact Disc manufacturing plant in North America opens in Terre Haute, Indiana. CDs previously had to be imported from Japan. Bruce Springsteen’s Born in the U.S.A. is designated as the first CD ever made in the United States.
8. The Jesus and Mary Chain release their first single, “Upside Down”.

And my least favorite music related events of 1984:

1. Sting plays his last concerts with the Police at the end of the Synchronicity tour.
2. Alice Cooper leaves the music industry after touring continuously for over ten years; he would return in 1986.
3. Def Leppard’s drummer Rick Allen loses his left arm in a car wreck.
4. New Kids On The Block are formed.
5. Ricky Martin joins Menudo and they become more popular than ever.
6. In Los Angeles Marvin Gaye is shot and killed during an argument with his father.
7.Lionel Richie’s hit “Hello” becomes Motown’s first ever UK million selling single.
8 Tipper Gore forms the Parents Music Resource Center (PMRC)
9. Van Halen concludes its 1984 world tour with a show in Nuremberg, Germany as part of the Monsters of Rock festival tour. This would be the band’s last concert with David Lee Roth as lead singer until 2007.
10. A-Ha’s career begins with the release of the “Take On Me” single in the UK.
11. The climax of a Judas Priest concert at Madison Square Garden goes awry when fans begin ripping out the cushions from the seats and throwing them on stage. Judas Priest will pay damages through insurance and be banned from MSG for life.

I welcome your comments below. What were your favorite musical moments and memories of 1984?